There are many things in life that you would assume you do not need to worry about, including eating, sleeping, and breathing, yet it seems that exercise and health scientists continually tell us that there are newer and better ways of doing so.

Breathing when running is more complicated a process than simply opening up your lungs. Getting the necessary oxygen for better cardiovascular performance can be the difference between getting into a higher gear and having to quit before you hit the top.

The Lungs And The Heart

The circulatory system that you use to get oxygen from the outside air to your blood cells is nothing more than one large muscle. Like any other muscle in the body, it can be toned and improved and strengthened. Instead of doing squats and bench presses, however, you only strengthen muscle groups like the diaphragm and abdomen by inhaling and exhaling. When you do any type of breathing for running, about three quarters of the work is done by the diaphragm muscles, meaning that increasing the strength of the diaphragm means increasing your capacity to take in valuable oxygen. 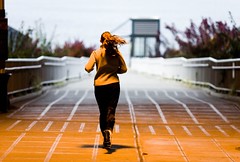 Being able to power through a longer run is partly about your leg muscles and partly about your lung muscles. Developing a higher resistance to the acidity that builds up when your blood cells process oxygen can go a long way towards keeping your muscles feeling fresh after they take a pounding on the pavement.

Being able to provide those blood cells with more oxygen, however, prevents the creation of acidity in the first place. A deeper breathing pattern will allow you to cycle more oxygen through your system than rapid, shallow breathing. What’s more, the deeper you breathe, the faster you can recover. Professional athletes who do high-intensity cardio in short bursts, such as rugby and ice hockey players, use deep breathing in order to recover from the exertion of a shift in the span of only one or two minutes.

When most people run, they only take in enough air to expand their chest rather than their stomach. Huffing is a typical response to cardio exercise, but only gets the air into the upper part of your lungs. When you run, you gain better results by deep breathing into your belly. Breathing only at the chest level will waste energy by moving the upper part of your frame more than deep breathing which moves the lower part.

Have a look at this video: