I recently managed to get my hands on the Promixx 2.0 Vortex Mixer and I really wanted to see what all the fuss was about. It’s been labelled as ‘more than a protein mixer’ but is it really a worthwhile addition to my gym bag and does it do everything it promises to? Check out the review I put together below.

What do you get in the box? 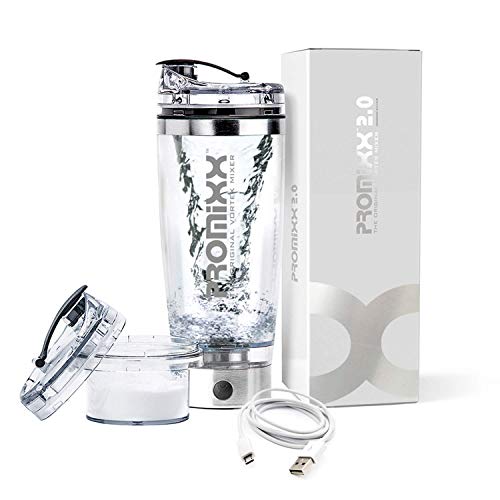 It’s basically a protein shaker with a motor attached. I like to think of it as something between an actual blender like the Nutribullet, and having a normal mixer bottle with a wire ball inside.

Before I go any further.

The Promixx is advertised as “The world’s most powerful handheld vortex drinks mixer. Capable of speeds of over 16,000RPM” 16,000 RPM is not a bad figure considering some of the smaller desktop plugged in blenders out there deliver 20,000 RPM minimum.

I tried it out with some really thick weight gainer I had lying around, I whirred it up for 20 secs and it seemed to do a really good job at churning it up, here are my results.

The Promixx 2.0 Vortex gives more of a fast spoon action rather than a blade movement to chop pieces up, so it’s not advisable to put stuff in here that doesn’t dissolve like frozen fruit or nuts. Do bear that in mind.

The container holds 600ml of liquid which is a good amount and is advertised as leak proof. I can’t say I’ve had the problem of a protein shaker leaking but it’s comforting to know they’ve spent the time ensuring this doesn’t leak, you do of course have to make sure that you don’t overfill it. Using the Promixx 2.0 day-to-day wasn’t bad at all. I usually use a conventional desktop blender that plugs in without any problems. My desktop blender being more powerful gives a much smoother blend, but the Promixx 2.0 as a portable shaker that I could possibly use when I’m out and about, say, in the car or in the office, the results are impressive.

The motor did strangely cut out completely a couple of times when being run on its own. I contacted the place I bought it from, and a replacement is on it’s way to me, quite disappointing, I hope it was just a one-off, but do look out for this if you do buy one yourself.

The motor clips on quite nicely to the bottom and isn’t too loud when being operated which is always a welcome feature.

From handling this I can feel that it is really well built, it has a bottom which stops it from slipping even on wet surfaces and the parts click together very solidly.

I think the Promixx 2.0 Vortex is a good product, it does what it promises and that’s basically to mix up your protein shake quite well…. My problem is that I find it too much hassle. I personally have had no problem whatsoever just manually shaking my protein mix up with a little wire ball inside to mix anything that is a little more chunky and harder to dissolve. If I need to blend bigger stuff and make say a smoothie, then I’ll use a normal plug-in blender, this for me is why I can’t see how this would be of practical use.

It’s an extra thing to remember to take care of. Normally, getting ready for a gym session it goes t-shirt, shoes, pants, shaker and protein powder. With the Promixx 2.0 however, its all of those things plus asking whether you have remembered to recharge the mixer, if not, where is the recharge cable? You have to make sure you remember to charge it. Not only that, the Promixx didn’t fit too snugly in the cup holder of my car, probably may not be an issue for you but this was just something that made it less useful to me, so for me, it’s not much use when I’m away from home.

If you have a blender at home that you use regularly then you don’t really need one of these. Another thing worth noting is the price. £40 for a mixer like this? you can get something like a magic bullet (or an alternative) which admittedly Isn’t portable but does have proper blades inside which will chop up nuts or frozen fruit for £25.

Do bear in mind not to charge this protein mixer near to your computer either, the rechargeable motor is removable and it doesn’t have to be attached to the bottom all the time, but I do imagine some people will still try and use it while it’s plugged in and inevitably spill protein shake all over their computer equipment.

Share
What is Seasonal Affective Disorder- Can a SAD Clock Beat It? Previous post
Top 6 Ways to Stick To Your New Years Fitness Resolution Next post