Why Do Some Men Not Train Their Legs?

I think most of us have seen these guys at the gym. The ‘top heavy’ guys, they come to the gym and focus mainly on bicep curls, stomach crunches and bench presses then hit the shower. You never see them training their legs Maybe if you’re lucky you’ll see them use the running machine!

Why Do Some Men Not Train Legs?

Some men are so obsessed with big arms and abs that they ignore the fact that having strong legs are just as important if not more important than having a big top half. Time after time I see guys neglecting their legs and frankly I think something needs to be said.

From a logical point of view the more muscle mass you put on top the more load your legs have to carry, so wouldn’t that mean that doing the odd leg extension or squat would help your body to lug around that heavy torso?

[one_half]From a personal point of view I would feel like a bit of a tool if I was getting down to some sexy times with my partner and I took my trousers off only to reveal hanging below my magnificently buff, ripped torso two noodle strand-like legs.[/one_half] Why do so many guys neglect the legs?

Ok, here’s my theory, and I can draw on a bit of personal experience from this. When I think back to all the action movies I watched as a kid like Predator and Rambo, when action movies weren’t action movies if the lead guy didn’t appear bare chested firing a machine gun, most of the emphasis was put on shots of Arnie’s oiled up arms and Sly Stallone’s bulging chest muscles.

We are told visually through these kinds of movies that big arms and a big chest is what it is all about. We all fall for it, and we all know the story of Popeye the sailor man and those anatomically impossible arms 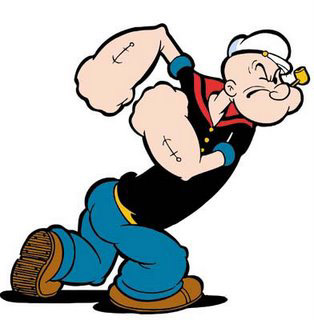 , what was that all about? Not once did I see Popeye’s legs inflate in size when he glugged down his beloved spinach, but he always saved the day, and Olive Oyll was always by his side. Maybe deep in the sub conscious of the ‘top heavy’ males is a continuous compilation of action movie topless scenes, Popeye spinach scenes. and shots of women swooning at the sight of a big bicep.

Fellow men, I implore you, wake up and stop neglecting your legs.

There are benefits to having working your legs:

1. Better support for your whole body

3. Less chance of leg and lower back pain

4.Exercising your legs often leads to the creation of higher levels of natural growth hormones – which helps your body produce bigger muscles all over.

Somebody once told me, “you can’t fire a canon from a canoe”. Take the holistic approach to getting stronger, your body will thank you for it.